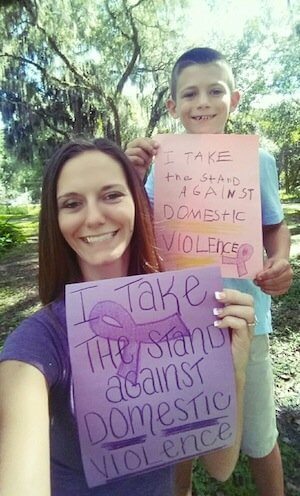 Jessica is a beautiful young mom of two, who survived a horrific act of domestic violence attempted murder. She is a walking miracle and has overcome so much!  After the father of her newborn son was arrested because of a severe beating, she ended the relationship and received a restraining order. As time went on they began visitation for their son and would exchange the baby in a public place with the abusers mom.

Jessica met a wonderful and kind man, Justin, who wanted nothing more than to love and keep Jessica and her son safe. Things were going well until her life was forever changed on May 27, 2010. She packed up the car to go and meet the abusers mom at 7-11 to have visitation for the baby who was 18 months at the time. Things went horribly wrong when it was her ex who showed up unexpectedly and attempted to beat her to death. She was choked, punched, and slammed onto the concrete until she was unconscious. When she came to consciousness she was still being hit and was lying over her screaming son to protect him as he was covered in her blood. She was able to break free and run inside the store where employees called 911 as her attacker ran away.

She was airlifted to the Bayfront Trauma Center where doctors worked tirelessly to save her life. Her eye was completely busted open, nasal cavity crushed and disconnected from her skull, orbital fractures, and most of her teeth were knocked out. Jessica had a long and extensive recovery but she thanks God everyday her son was not harmed in anyway. 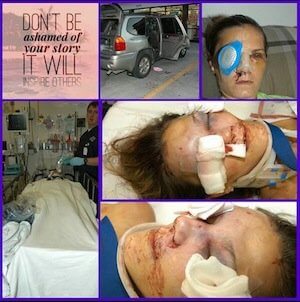 Her mother and loving boyfriend, Justin, helped her through the court dates and doctor appointments. Her attacker only received 15 years in prison on 4 counts 2nd degree attempted murder, child neglect, burglary and violation of restraining order. A few months later, Justin asked Jessica for her hand in marriage and they had what looked like a perfect and long life together. Justin was a motorcycle enthusiast and was working to open a repair shop. On March 30, 2013 they were riding together on Justin’s motorcycle over the Howard Franklin Bridge and something went terribly wrong. He began to slow down and pull to the side of the road, for what Jessica thought may be for a romantic look at the ocean. Within seconds, Justin slumped over the bike and they were struck by a vehicle. Jessica went flying over cars and across pavement. She could not keep her eyes off her husband as he was hit by numerous cars and ran over by a truck. Autopsy report did declare that he died instantly when his heart stopped due to hystoplasmosis.

After witnessing all of this, Jessica was overcome with gloom and sadness for the following months as she sat by his grave. She knew she had to be strong for her son and made the decision to pick up the pieces of her life to once again be a survivor who can overcome devastating tragedies. She now has a new love, Jermay, who she married in June of 2016.

Jessica is truly amazing, but still suffers from emotional and physical damage caused during the attack. Her mom reached out to Julie Weintraub and the team at Hands Across the Bay on her behalf because she was concerned she was struggling with getting passed all of this physical and emotional pain.  Jessica was painfully suffering inside but staying strong on the outside. We have helped her start a new life, speaking out, healing, and moving forward as an advocate who wants to help others. The day she came to our office, October 30, 2015, Julie declared as “the first day of the rest of her life!”

Due to the horrific attack at the hands of her ex, her eye was still causing her pain. We began a search to try to get a surgeon to remove the eye that had been damaged beyond repair and was now dying in her head. We are so very grateful to Dr. Jasmine Mohadjer M.D. of The Eye Institute of West Florida!!! Dr. Mohadjer partnered with Hands Across the Bay to donate the surgery to remove Jessica’s Eye and place and implant that would enable a prosthetic eye to move with her normal eye. Also, Randall Minor, an ocularist in Lutz, generously joined us to donate two incredibly beautiful handmade prothetic eyes for Jessica! One to wear in the day, and one for night. She is no longer in pain and so happy with the results!

We are also advocating for jessica in court as we fight to have her attackers parental rights terminated. We are very proud of all her hard work to get her life back and become an advocate to help fellow domestic violence survivors.

Learn more about Jessica by following her story on Facebook! Jessica’s Journey

Watch the beautiful story about Jessica and her heroes which was featured on ABC Action New’s Taking Action Against Domestic Violence 2016 Special.

Take a moment to read this beautiful article about Jessica’s surgery.