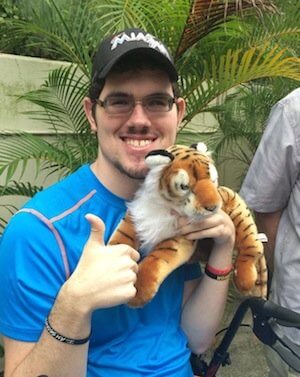 Christian Mayberry was a 16 year old boy who was out having fun with his friends. On September 1, 2013, they were driving ATV’s around Muldrow, OK when an irresponsible adult, Angela Grey, was under the influence and crashed into a ditch. Christian was a passenger on her ATV and was ejected 12 feet from the crash site.

There was blood pouring out of Christian’s ears as he laid there waiting for someone to call 911. Angela waited almost three hours to call to give herself time to create a story and clean the accident site of the empty beer cans. Angela, who had been left in charge of all the boys for the night, didn’t call Christian’s parents until the following day to let them know of the accident.

Christian was in a coma for 5 months after the accident before he woke up! He was in and out of various rehab facilities to help him heal, but the insurance company stopped paying for rehab and wanted to put him in a nursing home. Christian’s mom Kim knew that if he went to a nursing home, he would slowly deteriorate and eventually die.

Hands Across the Bay advocated for Christian and Julie fought the insurance attorneys to not let Christian go to a nursing home with no hope for improvement. With our assistance, Christian received desperately needed Traumatic Brain Injury treatment, rehab, and therapy in Florida. He has had to learn how to walk, talk, see, and speak again and is now thriving and adjusting to life as a TBI survivor. He has an incredible spirit, despite all he has gone through, and he shares his miraculous testimony with anyone who will listen. Christian truly believes that God saved him that horrific night and his faith keeps him going. He told the defense during the trial that he “came back to Earth from Heaven.” You can join us in support of Christian by following him on his page, Pray for Mayberry!

Julie and our team were able to meet Christian for the first time at our main event, Tampa Bay’s Dancing with the Stars 2015! He was so excited to get dressed up, dance and share his story with the audience. He described it as “The Best Day of my Life!!!!” While here, he also was treated with a VIP meet & greet animal experience thanks to our partners at Busch Gardens. Christian attended our event again in 2016 and it was amazing to see first hand the strides he has made in his recovery and watch him enjoy the experience with fellow HATB survivors.