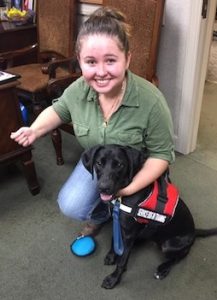 On July 13, 2013, Alyssa’s ex-boyfriend broke into her apartment with a .38 Special revolver in hand, with one goal in mind: To find Alyssa. Alyssa was shot three times. Twice in the head, and once in the abdomen.

Alyssa spent three weeks in the NICU (Nero Intensive Care Unit) and doctors said due to the location of the damage in her brain, she might never speak again. Alyssa did not know how to talk, how to eat, how to walk, or control her bodily fluids. She was a baby in a 21-year-old body.

In the hospital, Alyssa received 6 weeks of daily, physical, occupational, and speech therapies before she was discharged to be home with her parents for the long run.

When Hands Across the Bay first met Alyssa in 2013, she was still in the hospital fighting for her life. Our team has worked closely with Alyssa’s family over the last several years. Julie first advocated for her and met with the hospital staff to ensure she received the care she deserved, despite them trying to discharge Alyssa for insurance reasons. 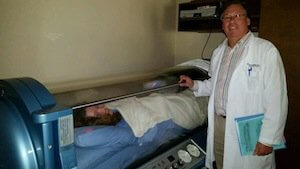 We have helped Alyssa receive different therapies and treatments, including physical therapy, occupational therapy and hyperbaric oxygen therapy. We have worked to help Alyssa improve her self-esteem and self-confidence as a SUR-THRIVER and we truly feel blessed to be a part of her miraculous life!

Most recently, we were able to help Alyssa rescue her new best friend, Gracie Lou! We have partnered with All American Dog Training to get Gracie Lou her service training so she can always be with Alyssa.

Despite a severe Traumatic Brain Injury and paralysis of her right dominate hand/arm, Alyssa never gives up!! She has learned to use her non-dominate left hand to function everyday. She has always been an artist, and she continues creating unique and beautiful pieces of art for each specific individual with her left hand. If you would like to donate to Alyssa’s recovery, please visit our donation page.

Alyssa’s Story in the Media:

Alyssa Meets Those who Saved her Life